Tom Ford Beauty Lava Lustre Extreme Badass Eye Quad ($89.00 for 0.1 oz.) features a new, “high-impact” formula that delivers high-shine, twinkling sparkle, and full coverage. It was like a much-improved take on the brand’s signature “sparkly” shade in their regular eyeshadow quads. All four shades performed similarly; they were dense and emollient enough to have minimal fallout during application and throughout wear, though it was not fallout-proof.

FURTHER READING:
Formula Overview
for details on general performance and characteristics (like scent).

It features a new formula that is supposed to have “full-coverage” with a “high-impact” finish. They were slightly thicker than the average eyeshadow, which I think was necessary in order to provide a creamier, denser formula that actually held and bound up all the intense sparkle throughout each shade. They had enough slip to apply and spread out without being prone to dropping lots of fallout (even when used with a brush).

They applied well with a moderately-dense eyeshadow brush or a fingertip with the latter yielding less fallout. The eyeshadows were opaque in coverage with high-shine, sparkling finishes with minimal fallout during application and later on during wear with them lasting around eight hours before showing signs of wear.

It was like a much-improved take on the brand’s signature “sparkly” shade in their regular eyeshadow quads. 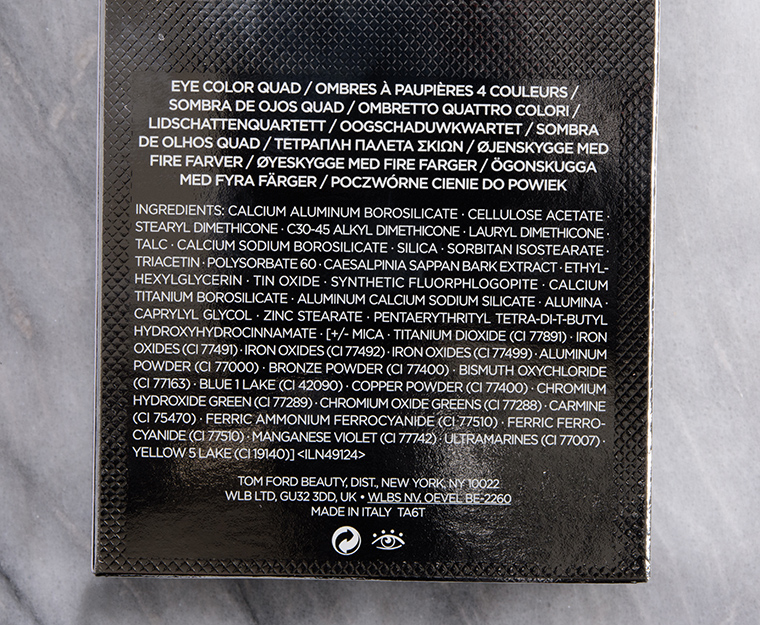 Lava Lustre #1 is rich, medium gold with strong, warm undertones and a high-shine, sparkling finish. It had opaque color payoff in a single layer, which adhered evenly to bare skin and blended out well with minimal fallout. The texture was moderately dense, lightly emollient, and thicker without being too thick, so it still worked with a dry brush, though it had the smoothest and least fallout-prone application with a fingertip. It stayed on well for eight hours with slight fallout over time.

Lava Lustre #2 is a rich, warmer bronze with a sparkling, metallic finish. The texture was smooth to the touch, dense and slightly thick, but it was emollient enough to pick up readily with a dry brush. It had opaque color coverage that applied evenly to my lid and diffused well along the edges without being prone to fallout. It wore well for eight and a half hours with very minimal fallout over time.

Lava Lustre #3 is a medium red with warmer undertones and a sparkling, metallic sheen. It had rich pigmentation paired with a lightly creamy texture that was dense, slightly thicker but not to the point where it became difficult to use with a dry brush or to apply evenly to bare skin. It lasted well for eight hours with slight fallout over time.

Lava Lustre #4 is a darker, gilded beige with warm undertones and a metallic finish and faint sparkle. It had a very wet-look to it when applied to bare skin, and it seemed to “melt” after a few minutes for a particularly seamless sheen. It had rich color coverage that adhered well to bare skin with a smooth, even laydown of product achieved even with a dry brush, though there was slight fallout if I didn’t use my fingertip to apply. It stayed on nicely for eight and a half hours before creasing slightly.

What was the first foundation you used in 2022?